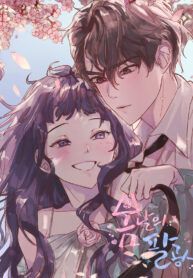 A long, long time ago, two siblings climbed up a rope to the heavens after being chased by a tiger. During that time, the younger sister Dalhee became a Moon Fairy. To become a true god, she must reincarnate a certain number of times, but she’s never been able to successfully live out her lives. Bored of her life in heaven, she looked down Iseugkyung to look for any troubles in the human world! “Please help me… I want to die…” After hearing a sad voice coming from Iseugkyung, she discovered a beautiful girl begging the Grim Reaper to leave her world. Soon after, the Grim Reaper came to take her life. Full of curiosity, Fairy Dalhee went down Iseugkyung and into the hospital room of the human girl. The woman who begged to die was surrounded by many people, and told Dalhee about her finace, Jiwan, who wasn’t even a bit affectionate towards her. He didn’t have a hint of compassion, despite learning that his fiancee was on the brink of death. It was surprising that this kind of person was alive on earth, rather than staying stuck in hell. Who is Dalhee? Is she not a kind and beautiful fairy? With the thoughts of guiding the spirit to the afterlife, Dalhee decided to live her life as a human without the permission of the Jade Emperor. Her unauthorized reincarnated life begins now. Despite impulsively making up her mind to save the man with a dark soul, Dalhee discovers its quite hard living as a human. Her life is already in tatters due to her fiance, but her younger sister and step mother do their best to make her life even worse. How will she make these humans more humane? There’s a long way to go, but should we start with the fiancee? A Heavenly Fairy vs. Trashy Humans The Fairy’s Trash Clean Up Project starts now!